My birthday is this week, so I wanted to do a little data project that was more fun.

Taylor Swift came out with a new album recently, and the number of colors mentioned in “Invisible Strings” inspired me to tabulate all of the colors she mentions in her music. So, eight albums later, here we have it!

Swiftian scholars may take issue with my classification of “purple-pink” as its own color, but given the context of the song it seems to refer to one color, not two. Complaints may be directed to the songwriter.

One could also challenge “champagne sea” (“This Is Why We Can’t Have Nice Things,”), because of its Homeric undertones, vis “wine dark sea.” While I am not currently swayed, I look forward to future research on both “champagne” and Swift’s iterations of “wine” and “rose.”

I only counted lyrics once; i.e., “loving him was red” (“Red”) is counted as one occurrence, despite being used multiple times in the song. 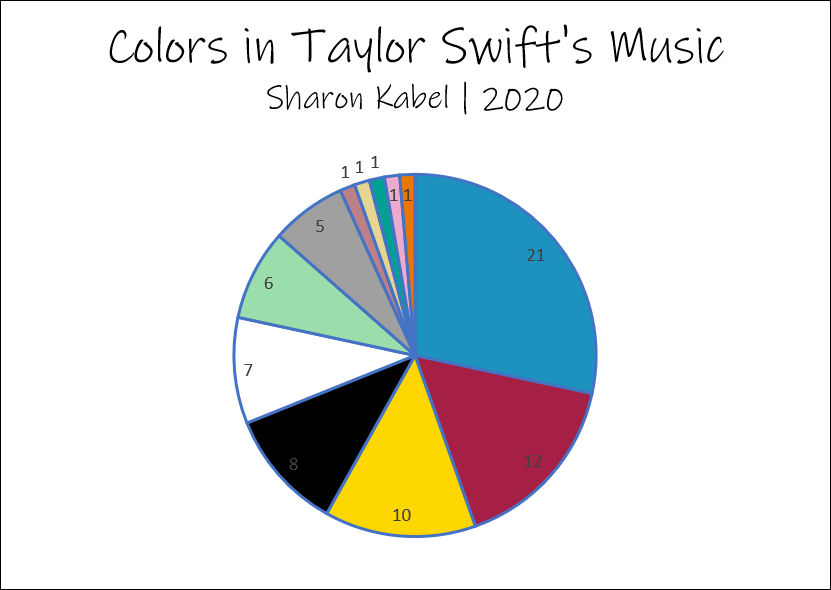 On those eight albums, I counted 74 individual instances of colors. The most common color, by far, is blue, followed by red and gold.

There seems to be a turning point around Red, when both the quantity and variety of colors increase.

Much grist could also be made of the shades within the most popular colors: “clear blue,” “ocean blue,” deep blue,” etc. “White” is obviously used in Swift's lyrical descriptions of proposals and weddings, the portrayal of which change dramatically over her discography.

Of course, none of this captures words connected to “light” and “dark,” which may cumulatively be even more prevalent than her colors.