This is the first post in an ongoing series, documenting assorted topics as they appear in Catholic Newspapers in the Catholic News Archive. How was the topic described? When did it peak in usage? Did its connotations or associations for Catholics change over time?

I could not find any relevant results about Catholic celebration of or participation in Seder meals before the early 1960s. The earliest relevant example is a curious one, from 19511.

KOREAN DISPATCH DESCRIBING DINNER BY RABBI AS INTER-FAITH SERVICE IN ERROR, PRIEST SAYS Taegu, Korea, (Mall)—Catholic, Protestant and Jewish chaplains here say that a New York Times dispatch describing a Jewish Passover celebration here as “interfaith” and “inter-religious” was based on a misunderstanding. The Jewish chaplain who had charge of the Seder here, Capt. Oscar Lifshutz, said that when Inviting the Catholic and Protestant chaplains and other Gentiles, he regarded the meal as a social gathering to commemorate the liberation of the Jewish people from bondage, not as a purely religious ceremony. When the Dayenu Litany was sung, the other chaplains were present out of courtesy, not as participants. “Frankly,” said Chaplain Lifshutz, “I am the Jewish chaplain here and I would not allow any non-Jewish minister to share my functions. The meal was held in a field hospital. Father Zielinski, the hospital chaplain, came to extend greetings,” said Chaplain Lifshutz. “In his talk he said that ‘we pray in different pews,'” The newspaper dispatch said that “the credo of the ancient Jewish festival was given by a Catholic padre in a prayer to God to free all people from tyranny.” “I did not recite any form of prayer,” declared the Rev. (Capt.) Aloysius Zielinski, priest of the Chicago archdiocese, “I said a few words stressing what all God-loving people have in common and also that we have, at the same time, different basic beliefs. ‘We cannot meet in the same pew,’ I said, ‘but we can meet on our knees and pray that others may enjoy the freedom we enjoy.’ The writer omitted what I said about our differences In belief and about our not meeting In the same pew.” The dispatch said that the Jewish chaplain, wearing his white prayer shawl, “led the service, flanked on the left by a Catholic priest and on the right by a Protestant chaplain,” “Chaplain Lifshutz assured me twice, before I accepted his Invitation, that the meal was not a religious service,” commented Father Zielinski. “He explained the prayer shawl as the sign that he is a Jewish chaplain. “It Is quite ambiguous to say that he was flanked by a Catholic chaplain and a Protestant. We were simply seated at the same table with him and we were not beside him. The dispatch failed to mention that two laypersons from the hospital staff, one a Colonel, the other a Lt.-Colonel, were also seated at the table and each beside the Jewish chaplain. The seating was according to army rank and not for any purpose of officiating jointly In a ritual.

Then, there is nothing of note until 1962, when St. Patrick Catholic Church of Wilmington, Delaware celebrated a Seder meal2. The article notes that Catholics, Jews, and Protestants were in attendance. 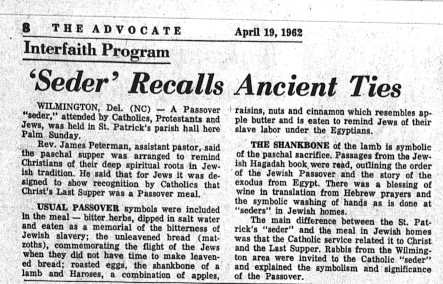 Seminarians at St. John's Seminary, Little Rock, Arkansas held the next reported-on Seder meal, in 19633. The photo below is of Father James Drane leading the Seder, in a prayer shawl.4 Father Drane was defrocked a few years later for his controversial support of artificial birth control. 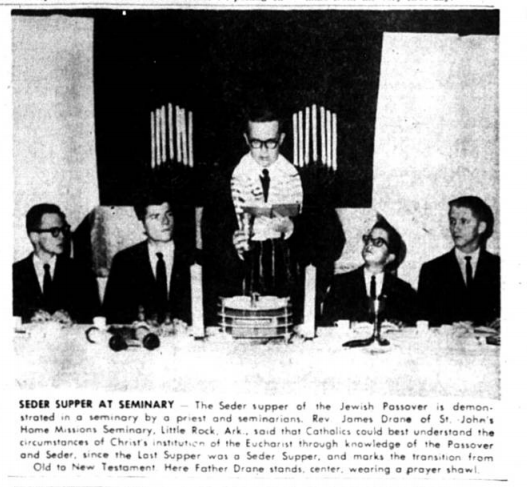 Activity increased in 1964, with both St. Mary's in Bethel, Connecticut5 and Stamford Catholic High School in Stamford, New York6 celebrating Seders. The former article notes that elements of the Seder meal are, “not ceremonies designed by Christ,” and the latter concluded their seder meal with a Catholic Mass - the first to do so in our results. 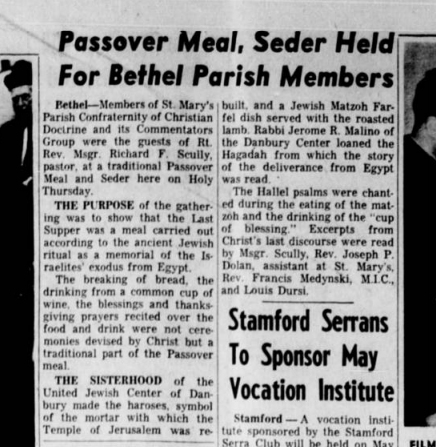 In 1965, there is a column on the Catholic Herald on how to celebrate a Seder meal.7 The writer refers to it as a “Paschal meal,” a search term I deliebrately avoided for fear of too many false drops. However, there is a lull in mentions of actual celebrations of Seders.

1966 compensates for this lull, with a half-page spread of Seder meal instruction at Ursuline Academy, New Orleans, Louisiana8. The article notes that, “Many religious teachers have said they would like to have a Seder demonstration in their schools,” suggesting that the practice was new and increasingly popular. St. Michael's, Union City, New Jersey, reenacted a Seder meal (the photo is next to a bizarre-sounding article about an experimental ‘Amsterdam Mass’ by Dutch Jesuits.)9 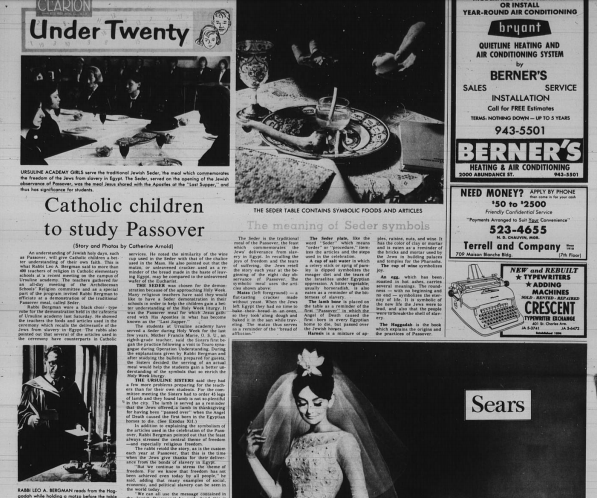 Then, there is nothing for several years, until two references in 1973. A 1973 article covers a speech by Father Benjamin Nunez, Costa Rican ambassador to Israel, on Jesus’ Jewishness and, “what we call the Last Supper, was actually called the Last Seder (Jewish passover meal) for Him, before he changed His mission."11 The same year, in a separate speech, Fr. Nunez criticized Pope Pius XII's “silence during the Holocaust”. Elsewhere, Our Lady of Mount Carmel, Hamden, Connecticut, featured in an extensive article on Seder meal education and celebrations.12

The final reference to Catholic celebrations of Seder meals is a group of religious sisters in New Castle, Pennsylvania, in 1975.13 Mass was offered beforehand, by Father Nicholas Dattilo - future Bishop of Harrisburg.

The final final reference to Seder meals in the Catholic News Archive is a long article about Passover Week and Holy Week in The Catholic Worker in 2001.14

While a search for “seder” by itself shows the most results in the 1940s, the results actually about Seder meals seem concentrated from 1962-1975, with the most activity around 1966 and 1973.