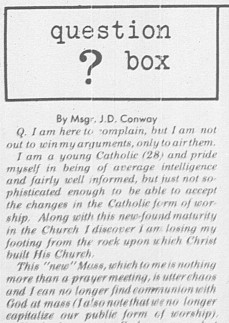 'You would not be heart-broken by these changes if you really understood the Church': A 1965 letter on the new Mass

Monsignor J. D. Conway ran a Q&A column in several Catholic newspapers, such as the Catholic Messenger and the National Catholic Reporter. Below is the full transcription of a letter from June 9, 1965.

Q. l am here to complain, but I am not out to win my arguments, only to air them.

I am a young Catholic (28) and pride myself in being of average intelligence and fairly well informed, but just not sophisticated enough to be able to accept the changes in the Catholic form of worship. Along with this new-found maturity in the Church I discover I am losing my footing from the rock upon which Christ built His Church.

This “new” Mass, which to me is nothing more than a prayer meeting, is utter chaos and I can no longer find communion with God at mass (I also note that we no longer capitalize our public form of worship).

I never could have believed that I was the type of Catholic who would go to Mass just to fulfill an obligation, but that Is exactly what I am doing since the changes have been made. I understand that some comment has been made to remove the obligation of Sunday Mass so that it will no longer be a mortal sin if one neglects to go.

After the priest's, “Go, the mass is ended,” I am more than glad to state, “Thanks be to God.”

In this day and age when we see such moral degradation, and we really need something firm and solid to hang on to, we find the Church slipping away from us. I really can't understand all this.

Eliminating the lenten fast, eliminating the Friday abstinence, no more promises in mixed marriages, a probable change of opinion in the Church's teaching on birth control: this to me smacks of appeasement of the Protestants! that after all these years our beliefs are old hat, and their religion is just as as good as ours. Rather like switching from reading the Bible to Playboy magazine.

I don't understand the wisdom of it all, Monsignor. Perhaps I am not a good Catholic. Really, my heart is broken – like I had lost my very best friend. I pray for guidance and understanding as I have six small children to lead on the road to salvation. I just can’t take this new route.

A. Though my mail is now running about ten to one in favor of recent liturgical changes, I publish your letter because it sums up many of the complaints I have been receiving, because it is honest and poignant rather than the usual vicious diatribe, and because you sign your name, which is contrary to the practice of most assailants of change.

You do well to pray for guidance and understanding; you need them badly. The most I can hope to do is point out a few blunt facts which you must accept in hu mility before you can hope for peace or progress.

You are bitter. If you love the Church, you must quit fighting her. Bitterness blinds us to truth, stifles love, prevents understanding. Your caustic attitude leads you to exaggerate your problems of adaptation. The early stages of change are fumbling and maybe distressing, at times, but they demand our patience and cooperation, not out bitter complaints.

HERE ARE a few of the deformations of truth which your acerbity produces:

The “new’’ Mass is in every essential way exactly the same sacrifice, the same public worship, the same supper of love and communion as the “old” Mass. The changes arc designed, not to alter its character, but to permit us to understand it better, to learn more from it, to lake more from it, to take more active part in it, and to receive more graces from it.

Your six small children probably give you little time for study, but no one should presume to criticize Mass changes who has not read and carefully meditated the Constitution on the Sacred Liturgy which was adopted by the bishops of Vatican Council II in union with Pope Paul VI. It Is one of the most important documents of the Church, adopted after years of careful and prayerful study, under guidance of the Holy Spirit.

You clearly exaggerate the problem of prayer cards and narrators (called commentators). They may be slightly annoying at times, but only a rebellious spirit can make them major Irritants. Many of their annoying features are temporary. Proper hymnals will become available, the congregation will learn when to stand and sit, and the commentator will acquire more suavlty and proficiency,

You have nothing more than rumors on which to base your speculation that the obligation of attendance at Sunday Mass will be removed. These rumors are more idle than authoritative.

You have no reason at all to say that the word Mass is no longer capitalized. This is a question for grammarians, and usage has long been diverse.

The lenten fast was largely eliminated in 1942, because of the war. Subsequent changes, whether lax or rigorous, have been mostly on a local basis. The Church faces a real problem as to whether this fast can and should be effectively restored.

There is at present no indication that Friday abstinence may be eliminated.

THE PROMISES before a mixed marriage present a profound problem of many phases. Do we have the right to impose on a Protestant an obligation which violates his conscience? How effective are the promises in actual practice? Is it advisable for us to maintain a practice so offensive to our Protestant neighbors, so divisive, and so patently unfair in their honest judgment? How many Catholics are driven from the Church because of these promises? I have heard that in parts of Germany 70% percent of mixed marriages take place outside the Church. Much study, theological, sociological and canonical, needs to be made on this complex problem. The Church will not act until such studies are made.

The problem of birth control Is much more complicated than that of prenuptial promises. It involves questions of demography, sociology, economics, human nature and personality, physiology and medicine, education, doctrine and morality, These are all under study at the present time. We can only pray that the study will he thorough and enlightened. Indications are that changes will be minimal – and temporarily inadequate.

One of the objectives of recent changes is to get us to be familiar with the Bible, to read, love and understand it. Your reference to switching from it is facetious.

You would not be heart-broken by these changes if you really understood the Church, and appreciated the work of the Holy Spirit in guiding her decisions. You could learn about it by studying the Constitution on the Church of Vatican Council II. And you would not worry about our “appeasement of the Protestants” if you had studied the Council's decree on ecumenism. For most people of good will It Is lack of understanding which makes them opposed to change.