Missals in the Shepherd of the Valley

I recently started a comprehensive search of ‘missal’ in the Catholic News Archive (CNA).

By ‘comprehensive’, I mean that I am documenting every single valid result I get. (Invalid results would be anything that isn't actually the word missal, like dismissal.)

This is a departure from my usual method of newspaper research. While I always review every result, it is generally not necessary to capture every result in my final product. For example, one news article may have run in 4 different newspapers; I only need to note it once.

For a small project, like fact checking a story about Pope St. John XXIII, I expect to include 15-20 references, distilled from roughly a few hundred to a thousand. For a more serious work, like tracking the disappearance of the Latin Mass after the Second Vatican Council, I looked through a little over 2,000 references.

For this project, I'm keeping it as simple and as broad as possible: I'm going through over 6,000 results for missal in the CNA, and adding each one to a spreadsheet. I'm going through the results by newspaper - 15 newspapers in all - and noting data points like issue date, type of work (advertisement is likely going to be the most common category), price (if it's an ad), bookseller/publisher, and type of missal. ALl of this data lives in an airtable, which I hope to make available once I'm done.

As with any project, I find interesting things along the way that don't necessarily fit in the scope of the project. I'll document them here, as I find them.

Shepherd of the Valley

Today's newspaper was Shepherd of the Valley (SOTV). SOTV was a Catholic newspaper published in St. Louis, Missouri. Issues from 1832-1903 are available in full, for free at the CNA.

I went through 79 results. The majority of the results were for Catholic booksellers: John P. Reily and co. (Pocket Missal, $0.75) and J. Keller (Missale Rom.). THe notable exception to the advertisements was a series of heated letters exchanged between a Catholic priest and a Presbyterian minister, nicknamed “THe Philadelphia Controversy” 1. The letters originally appeared in The Presbyterian, and were reprinted in both SOTV, and The Catholic Telegraph - next on my list!

“The Pope is said to meditate founding an order of married preachers, by way of finding employment for those English clergymen, who, being married, cannot become Romish Priests. Also, it is hinted that they will be allowed to use the English Liturgy with certain modifications, says the English Churchman. —Churchman. The Pope is of course going to do no such thing. There is already an order of Lector (Reader) recognized among the minor orders of the Church, to which the obligation of celibacy is not attached, and the functions of which might be discharged with profit to, themselves and others, by converted Anglican Clergymen, supposing the number to be great, and the circumstances such as to call for and justify such a return to ancient usage. As to the English Liturgy, it would not require much modification to make it an exact translation of the Roman Missal, of which it is only a deteriorated counterpart, so that James I. is said to have characterized the Anglican Service as *an ill said Mass.””

The really valuable find was another reprint. Father Frederick William Faber delivered a series of lectures, which turned into a book called The spirit and genius of St. Philip Neri, founder of the Oratory lectures delivered in the Oratory, King William Street, Strand. 3 This book was reviewed extensively, and with much valuable commentary, by The Rambler 4. Excerpts of The Rambler's Review were carried in SOTV. The (36 page!) review is worth reading in full, but I'll include a particularly beautiful part below, as seen in SOTV 5: 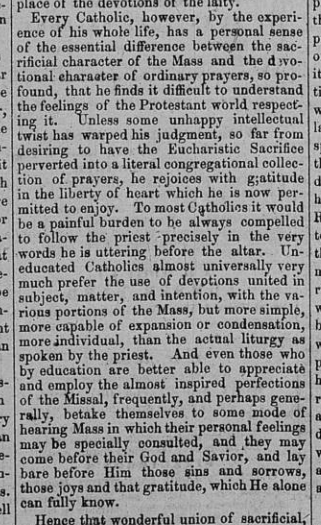 “Every Catholic, however, by the experience of his whole life, has a personal sense of the essential difference between the sacrificial character of the Mass and the and devotional character of ordinary prayers, so profound, that he finds it difficult to understand the feelings of the Protestant world respecting it. Unless some unhappy intellectual twist has warped his judgment, so far from desiring to have the Eucharistic Sacrifice perverted into a literal congregational collection of prayers, he rejoices with gratitude in the liberty of heart which he is now permitted to enjoy. To most Catholics it would be a painful burden to be always compelled to follow the’ priest precisely in the very words he is uttering before the altar. Uneducated Catholics almost universally very much prefer the use of devotions united in subject, matter, and intention, with the various portions of the Mass, but more simple, more capable of expansion or condensation, more individual, than the actual liturgy as spoken by the priest. And even those who by education are better able to appreciate and employ the almost inspired perfections of the Missal, frequently, and perhaps generally, betake themselves to some mode of hearing Mass in which their personal feelings maybe specially consulted, and they may come before their God and Savior, and lay bare before Him those sins and sorrows, those joys and that gratitude, which He alone can fully know.”