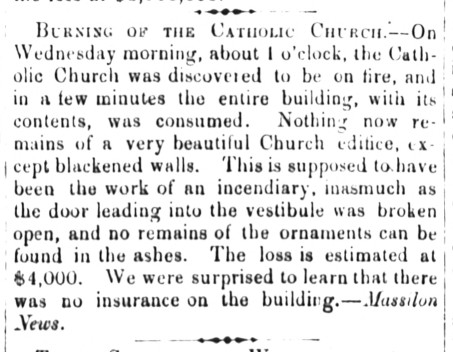 This project started off as something entirely different than what it is now.

In 2018, the Facebook group Cathedrals: From Era to Era sprang up. Their “About” section (as of January 2019) reads, “A page for sharing content regarding architectural revolution that occurred within the Catholic Church throughout the 20th Century, and after.”

After following the page for several weeks, two trends jumped out at me: the recurring mention of church fires in the immediate pre- and post-conciliar era, and more obviously, the wildly varying quality of the photos of the churches. At the time, I was more concerned with the first observation, and I wondered if there was any observable trend in American Catholic church fires.

I used the Catholic News Archive, a full text database of American Catholic newspapers, created and maintained by the Catholic Research Resources Alliance. I did eventually find a clear answer to my first question - what decades had the most fires? - but found something possibly far more important, and more connected to my second observation.

Because of the likelihood of false drops (search results that are not relevant), I checked each article several times. The more I cleaned the data, the more questions I had. Why were so few churches unnamed in the 19th century? Why were there so few (usually no) images or illustrations of churches anywhere on the Internet taken or drawn before the world wars? Was there a difference in the way newspapers reported stories from 1860 versus 1960? How and where could I verify a church’s name, a possible fire, its location, and its ultimate fate? Why did the decades with the most fires have the most fires? What information can I find from Catholic dioceses, or local cultural/historical institutions?